Fear of the unknown is a fear that can truly scar a person’s mind and well-being. Feeling lost, not knowing what the next move is going to be, what you want to do in the future, or fear of being stuck in the same daily routine and having no sense of success or prosperity in whatever it is you may be doing.

Today’s post is going to be for all of my fellow high school, college, and post-college kids. Those of you who may be feeling really lost right now because you feel as though you have no idea where your life is headed.

We’re at a point in our lives, and an age, where it feels like we should have everything, if not most of it, already figured out.

High Schoolers: Ya’ll are supposed to be making, or starting to make, big decisions in your life about college; picking the right schools, figuring out what you want to major in, whether or not you should stay close to home or get the hell away from it, etc.

College Students: You’re pretty much considered an adult already; you should be using this time to figure out the more “important” things in your life than just partying and hanging out all the time (or so people assume this is all you do).

Post-College kids: People think/assume that we definitely must already have everything figured out; where we’re going to work, relationships, where we’ll live, and pretty much just have our whole lives mapped out in front of us already.

ALL OF THESE EXPECTATIONS ARE UNFAIR AND UNREALISTIC!!!!

It’s because of the society we live in today and how the media tends to portray all of these people and things, that forces us and the people around us to have these unrealistic expectations of “having it all figured out.”

Not everybody is a celebrity or general public figure. Not everybody will have everything figured out, planned, and set for the remainder of their lives by the age of 17-18 (A.K.A. the Kylie Jenners and Justin Biebers of the world). And if you are one of those people who this has happened to, congratulations, that must be really great for you; but for those of you who don’t, that is perfectly okay too.

I know so many people who are currently struggling at the moment to figure out what the next move in their lives should be. They feel like their not going anywhere with their lives and like they could be doing so much more, and they’re so hard on themselves because of it. That may be true (that you could be doing so much more), but take your time and figure it out as you go along.

Yes, it’s fine to have a plan for yourself and dreams, but keep in minds things can/will change, that’s inevitable, and you could end up on a completely different path for yourself than what you originally envisioned.

I don’t have it all figured out, sure I have a plan for myself but I’m always prepared for it to change, whether in the smallest or biggest way; it happens. You just have to remember that it’s all part of life’s process, and we have to learn to trust the process. But don’t beat yourself up over not having it all figured out, and as a result, you rush the process and just settle for whatever first comes up.

NEVER SETTLE!! Yes, of course it’s fine to be realistic for some, if not many, of these decisions you would make, but I always tell people that have spoken to me about their fears for this to at least try going for the things that you love to do first. Try it out, see how you feel about it, and if that doesn’t work out then that’s okay, but at least you would be able to say that you tried it out, and then moved on to something else.

Try a million different things and see which one, or few, work for you. Replace fear of the unknown with curiosity and excitement! Screw what the media and society in general thinks and tries to categorize as “the norm,” do what makes YOU happy and take your time doing it, because at the end of the day it’s your life and you do what you think is best for YOU. Not what you think other people want for you or will accept. Don’t be afraid to take risks, don’t be afraid of getting judged by fellow family/friends, who cares what they have to say or think. People are going to talk regardless if you’re doing good or bad, so may as well do what you want anyway. 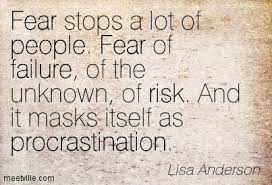 Don’t feel rushed to figure everything out, take your time and really figure out what works for you and what doesn’t. But also, don’t use you feeling lost or the fear of the unknown as an excuse to not do anything at all. You have to be helping yourself figure it out in some type of way; set aside a certain amount of time throughout the day to really sit down and figure out your interests/hobbies, which you like the most, and which you could see yourself getting far with in a career. No one’s going to do that for you, especially since nobody knows you better than you.

You got this, you’ll figure everything out eventually. Take it step by step, day by day. Don’t rush, take your time, and everything will work itself out for the best. It’ll all happen at its own time and pace.

That’s all I’ve got for today, hope you guys enjoyed this post, and until next time!