So this might be considered cheating to some extent, because it’s been about 3 years since the last time I was in Cancun, but a lot of people would always ask Diego and I about the hotel we stood at, the things we did, our general package when we were there, etc. so I figure why not do an entire post detailing it all?

Cancun was the first place that Diego and I had ever traveled to together. We went there in July 2015 to celebrate our 1-year anniversary as a couple, and then, since we loved it so much, we went back again the following summer (summer of 2016).

Both times that we went, we stood for a week. Saturday to Saturday if I remember correctly.

I guess first and foremost we should talk about the pricing of it all. I don’t remember any specific amounts or prices, but I do remember that because our package was all inclusive, it was one set price for relatively EVERYTHING.

For both times, Diego and I didn’t pay more than about $1,200-$1,400 (each), which included flights going and coming, hotel, car service to and from the hotel when we were arriving and leaving, and breakfast, lunch and dinner at the hotel. Plus there was all the cool little extras within the hotel that were included, which I’ll get into in a little bit.

So, all in all, we really didn’t spend all that much (thankfully). The only outside things we spent some money on were the excursions we did, souvenirs, and if we decided to eat or order out from the hotel.

One thing we were a little worried about the first time we went was money. We weren’t sure if we HAD to convert our money, how much we should bring, etc. And if I remember correctly, the first time we went, we brought/converted I believe $300-400. We came to find that although it was fine that we did that, it really wasn’t necessary. They’re pretty modernized over there (in the touristy parts anyway), so just keeping our American money and credit cards was fine, which we learned our lesson with the second time we went.

The name of the hotel we stayed at (both times) was the Riu Palace Peninsula. It’s such a freakin’ beautiful hotel to stay in when you’re in Cancun, 10/10 would recommend it to ANYONE that asked me. The scenery was gorgeous, the hotel was AMAZING, and all of the staff were so nice. I literally cannot say enough amazing things about this hotel.

The rooms were really nice and cozy too. Comfy bed, nice decently big shower, and even a Jacuzzi! The first year we stayed here our Jacuzzi was outdoor, right outside our room on the balcony, and the second time it was right in the middle of our room which was pretty cool.

For both times that we went, we stood in the same hotel. Which, looking back at it now, probably wasn’t the smartest thing to do. Yes we loved it both times and there were never any issues, but we pretty much experienced everything that we could the first time around, so the second time was ultimately just a repeat of that. Same amazing service, still, but it would’ve been best for us to book a different hotel, just to be able to experience a different one. 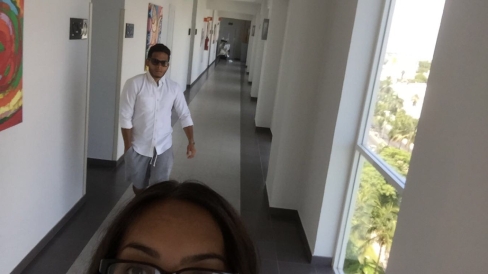 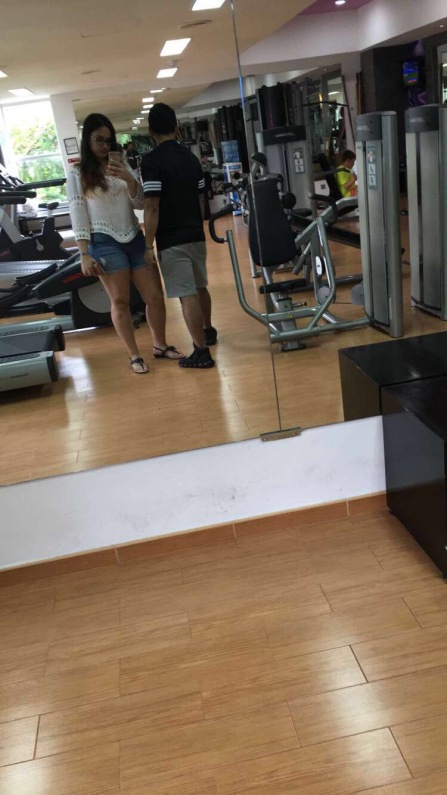 One thing that was really great about this hotel (among other things), was the fact that within the hotel, there were 4 different kinds of restaurants, plus a buffet area separate. There was a steak house, an Italian restaurant, a Japanese restaurant, a Mexican restaurant, and a fusion cuisine restaurant. We’re huge foodies, so for us, this was heaven. We legit tried a different restaurant everyday that we were there, plus ended up at the buffet for breakfast, lunch and dessert (and occasionally dinner as well haha). Not to mention there was 24-hour room service and a sports bar that was open 24-hours as well to get drinks and little snacks.

All of the restaurants were included in the ‘all-inclusive package,’ so the only thing we had to worry about was making reservations for the restaurants and leaving tips.

Aside from the hospitality and great food, I think we can all agree that excursions are probably the best part(s) of ANY trip. Fortunately for us, Cancun had a TON of them.

Our first time here we did 3 major ones that were 100% outside of BOTH our comfort zones, which made it that much more great.

And the second time we were here, we did a bunch that were somewhat out of our comfort zones as well and just as fun.

When we first decided to come here and were thinking about the stuff we wanted to do, we knew we wanted to do one thing/excursion that was super adventurous and one that would allow us to not only have a good time, but also learn more about the history and culture of the destination we were at.

If you are in Cancun and looking for a day-long, amazingly fun excursion, I 1000000% recommend for you to come to this park. We got to do this amazing ziplining course, swim in a cave, and ATV through the freakin jungle. To this day, that was probably my favorite excursion EVER. To be honest, I’m the biggest scaredy-cat EVER, so I don’t know what had suddenly came over me to be able to do all of these things, but it was AMAZING and so fun! I wish I could do it all over again.

What was really great about this excursion too was that it came with a lunch buffet; all types of great food, desserts and drinks. So we burned ourselves out with all of these activities and then got to stuff our faces afterwards lol.

Price wise, this was also the most expensive excursion. If I remember correctly, it was over $100 per person. But considering everything you were getting for the price, I think it was 100% worth it. 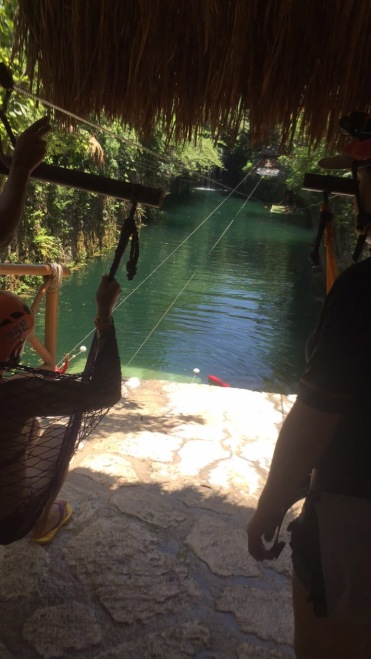 Chichen Itza is considered to be one of the seven wonders of the world. Ultimately it’s an archaeological site, displaying the advanced civilization of the Mayan people. It was actually a really great cultural experience, and interesting to see a lot of the natives from the area going about their daily routines, seeing the way they lived, etc. I would definitely recommend this if you’re looking to add a bit of an educational aspect to your trip. One thing I will say that we were totally unprepared for was the HEAT. We knew we were going to be outdoors, but didn’t know how intense it was going to be out there. It was so hot that both Diego and I got such an insane sunburn.

I would definitely recommend bringing a backpack with a few bottles of water, sunscreen, sunglasses and/or a hat, and a mini fan if possible because that Mexico heat is NO joke. 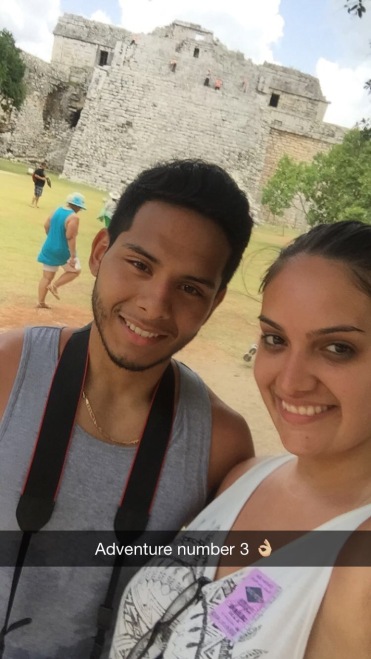 Doing this little excursion was actually Diego’s idea. It was the day of our one year anniversary, and I remember he was looking up at the sky watching these other people doing this, and just ended up being like “you wanna do that?”, and I was like ….. ._. um…not really. He ended up pushing me to do it, and as you can tell from the video below, I was shitting bricks. Overall though, I don’t regret it at all, it was fun and definitely something different that neither of us had tried before.

I feel like jet-skiing is one those things that’s kind of a must whenever you go away on any sort of tropical vacation, and we hadn’t gotten to do/try it the first time we were in Mexico, so we definitely had to make time for it the second time around. It was a great little experience for the both of us, even though I was nervous as hell because I had heard a lot of scary stories from people I know when they were on jet-skies. 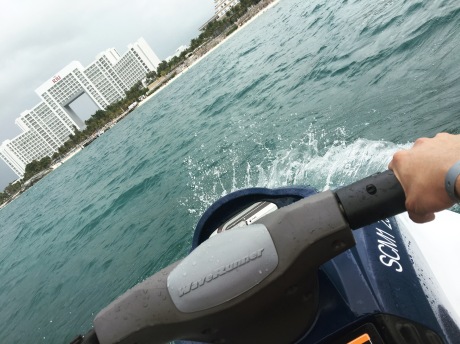 I have absolutely no idea why I don’t have many pictures and/or videos from this excursion we did, but we also did snorkeling which included speedboating as well. This was cool because we got to ride by other portions of Cancun which were absolutely beautiful, which then led us to a portion of water that allowed to snorkel for a bit. Again, I was a chicken shit lol. It was all fun and games until I actually got in the water!

*Side Note: I can’t swim, which is why I got freaked out in the water.*

But it was a pretty cool overall experience for the little time that I actually spent in the water. We got to be around a ton of fish for a while and then ride all the way back to the starting point.

This particular excursion was really cool because it came with 2 different things to do, which was speedboating and ATV-ing. Since Diego had driven the boat the first time we did it, I figure I take a crack at the second time around 😉 . I’m sure it’s safe for me to say that we were both a bit nervous for that; and I was definitely a little shakey at first, but by the end of it I got the hang of it lol. I for sure got too excited and was on my Fast & Furious shit haha 😂

And finally, we did ATV-ing. This was dope because we got to ride through the Mexican jungle where we saw natives on foot going about their business, and also other people on a separate excursion riding horses and we got to ride along the beach too. This excursion also came with lunch included which was great because after being in the blazing sun for the majority of the day, that was definitely needed.

Another great thing Diego and I got to do was a little photoshoot on the beach and throughout the hotel to celebrate our one-year anniversary. Neither of us had done anything like that before, and it was really special for us so we figure why not. It was definitely a little pricey, but all in all I would say it’s worth it because the pictures came out beautiful and now we have that memory and those keepsakes of our first anniversary AND trip ❤

Overall, this was a GREAT first (and technically second) trip for both of us, especially since we were more or less just starting out as a couple and knew we wanted to go somewhere fun, but not too pricey. So I definitely recommend this to anyone, or couple, that may be contemplating a place to go that’s nice, fun, and not CRAZY expensive, especially if you really look into it and see how many great things will come along with wherever it is that you may be staying, or the excursions you may be doing.

I know this was actually a pretty long post, but it was really just because of all the pictures and videos that were included!! Hopefully I’ll get better at narrowing down all of these things as I continue to do these particular posts.

But I hope you guys enjoyed it and this was helpful to you in some type of way when it came to knowing about the hotel we stood at, the particular excursions we did, and the trip in general!