I hope everyone had a GREAT and long Thanksgiving weekend, whether you spent it with family, friends, significant others, etc.

As we all know, Thanksgiving is a time for us to all be thankful/grateful for everything we have in our lives at the moment. It’s a time to really step back and realize how many blessings we truly have compared to those that may not be as fortunate.

That being said, in today’s post I’m going to be speaking about an event that Diego and I put together this past Wednesday in order to be able to give back a little during this holiday season to those that are less fortunate.

The Process to Gather Supplies & Put Everything Together:

This event was something that Diego and I had spoken about doing together for a few years now since we had gotten together. We always knew we wanted to be able to help out the homeless around New York, but it was just a matter of actually planning it out and right timing. Last year we got pretty close to doing something, but for one reason or another, it never ended up happening.

So, this year, we knew for a fact that we wanted/needed to make it happen. Just amongst ourselves, we had played around with the idea for a few weeks leading up to November, but it wasn’t until November 1st that we actually made it known to people through our social media accounts what we were actually trying to do (which was to create care kits for those that were homeless and then pass them out around the streets of New York). We asked our friends/followers to contribute and/or donate any supplies and money that they could, while also (if they could) donate their time to help us put everything together and come out with us to distribute everything.

Time went by super fast which was a bit nerve-racking because we weren’t sure if we were actually going to have everything in time to make our event happen, but thankfully, everything happened the way that it was supposed to, and before we knew it, it was Tuesday, November 20th and the day that we were putting all of our little care kits together.

Each care kit came with: 1 sandwich, 1 water bottle, 2 snack bars, 1 pair of socks, 1 hat, 1 pack of tissue, 1 small bottle of hand sanitizer, a sweater or jacket and a cup of hot coffee if they wanted it. 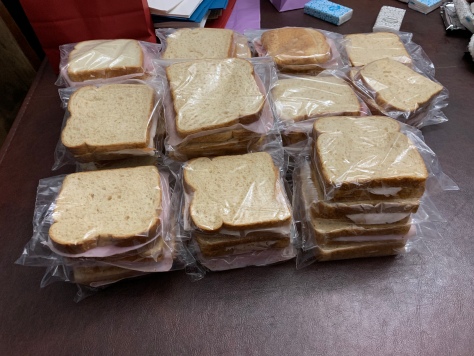 We didn’t actually have a set number of care kits that we were going to make, we just knew we wanted to make as many as we possibly could with the amount of supplies that we had.

After putting everything together, we ended up seeing that we were able to make a total of 47 care kits for people.

Wednesday, November 21st: The Day We Passed Out The Care Kits:

Diego and I knew that we wanted to be able to go out and distribute everything that we had the day before Thanksgiving in hopes that it would be/feel slightly more significant and memorable to these people (not to say it wouldn’t have been significant regardless, but nonetheless). Unfortunately for us though, we realized a little too late that we were going out for this on one of the COLDEST nights of this Fall/Winter season thus far.

There was about 8 of us that night going to pass out all of the care kits and although it was freezing outside, and we had ended up starting slightly later then what we originally intended, we continued to try to stay optimistic….

Like any major event that you end up putting together in your life (especially when it’s a first-timer), there was a lot of nerves and excitement building up around the entire thing.  Excitement, because we knew we were doing a good thing (or trying to) for these people that we didn’t know, but knew needed it. And nerves, because none of us had ever done anything like it before, so we didn’t necessarily know how to go about doing it.

There were also a ton of other things going through our minds about it like how to go about approaching these people and how to truly even decipher if they were homeless or not (without trying to accidentally offend anyone), etc. But, before we knew it we were in the city and it was officially time to pass out the care kits.

We went all over the major parts of the city like Penn Station, Madison Square Garden, passed Times Square and Bryant Park, Grand Central and even up to 51st street (which actually ended up being our last stop), which I am proud to announce that we gave out every single one of our care kits to people that we saw that night!! 😀 (scroll down to see pictures from throughout the night). 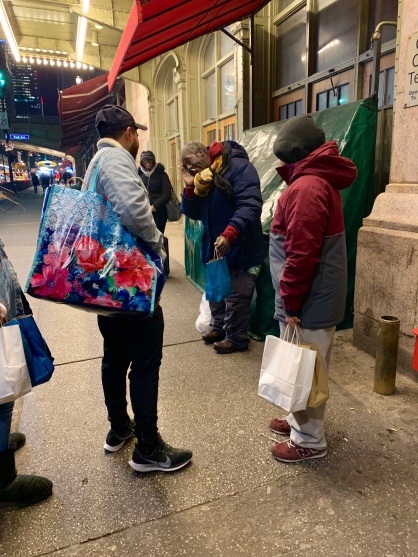 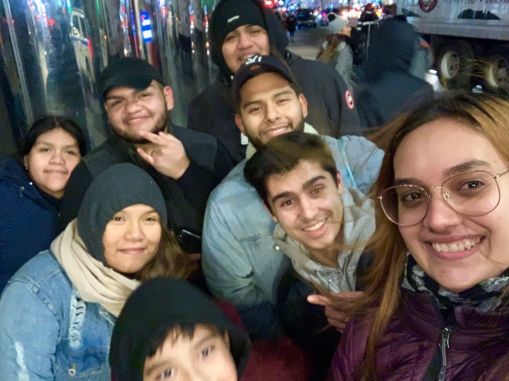 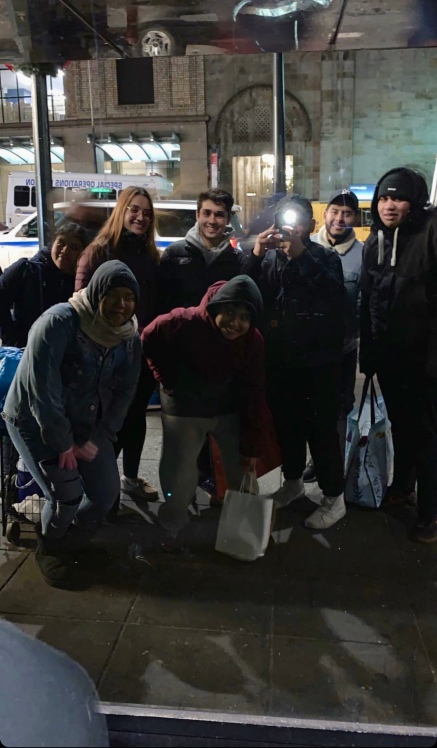 Our General Experience From The Event:

Thankfully, I think I can speak for everyone when I say that although we were all super nervous in the beginning, we were all pleasantly surprised by the end of the night at how smoothly the entire thing went, and also at how unbelievably grateful everybody we encountered was.

I don’t exactly know what I expected, but I definitely don’t think it was to get as positive a reaction as we did from pretty much everyone we gave a care kit to that night. I’m not really sure why, but I just didn’t. The reactions from most people were stunning, in the best way possible. Although there were SO many different ones, 2 examples in particular stood out to me the most…

The first woman we saw and gave a care kit to, Charmigne, was probably the sweetest woman I had ever met, especially for someone in her situation. I went up to her with Diego’s nephew Aden, simply asking if it was okay with her that we gave her one of our care kits. She answered, “of course,”  which then followed by her asking us our names. We introduced ourselves, she introduced herself, and then she continued by commending us on the work we were doing. She said it was amazing to see us, such young people, walking around attempting to help people like them, especially since it was more than she had seen people of higher power (our government) do for people like them (her words).

She then proceeded to ask Aden if he prayed, he said yes. She asked him if he would mind saying a prayer with her, which he got a little nervous and said that he didn’t pray out loud around other people. But she saw the rest of our group standing at a distance behind us, and asked him if he would feel more comfortable doing it if everyone from our group did it with us, to which he said yes. So, I called them all over, we all held hands, said a few things we were grateful for, said a few of our hopes for her and the people that we were going to encounter that night, and before we knew it, we were on our way. But not before she was nice enough to let us know certain areas in particular to head to, to be sure we saw others in her situation to be able to give our care kits to.

The second example was actually one of the last experiences we had of the night, and it was these 2 guys Eric and Shan who were just as grateful as Charmigne was, but they also just kept questioning why we were out there, in the freezing cold doing what we were. We responded by saying that we wanted to do what we could to give back a little this holiday season, and they were just in awe. They couldn’t believe we had actually willingly wanted to be out there, and expressed to us that it was people/kids like us who were actually slowly but surely saving the world…

Who would’ve thought? Our small gesture of wanting to put together these little care kits for people, would really be enough to have them completely look at the world differently, at least for a little while. I don’t know about anyone else that was involved, but for me, those 2 examples alone were enough to make the entire 5 hours that we were walking around, 100% worth it. Obviously there were a ton of others, but these were the ones that stood out the most for me.

Overall, we were all so unbelievably happy at the positive responses we had continuously received throughout the night, not only from the people that we had given the actual care kits too, but also from our families and friends that had known about us doing this.

And I think I can speak for everyone when I say that it was definitely a humbling, eye-opening experience for us all, because although sometimes we may say we are thankful for everything in our life, we do also sometimes tend to take for granted the “little” things like having food, shelter and clothes. Things that we sometimes don’t even think twice about, because we never really had to. An experience like this definitely puts all of that into perspective.

Personally, I wish that we could’ve done more, but you know what? Looking back at it, considering we managed to be able to give out every single care kit we had, I don’t think we did bad at all. Plus, this was our first time ever putting something together like this so it was definitely a learning experience, and there’s always next time to be able to try doing something more, bigger and/or better.

I really want to just take a second to thank every single person that was involved in helping put all of this together….whether you had donated money, or actual materials/food, or even just donated your time to be able to come out with us and pass everything out….thank you SO much; because without you guys, we wouldn’t have been able to make it happen. Irene, Jailene, Victoria, Tabatha, Chris, Mom, Tyler, Genaro, Pablo, Leslie, Alfred, Miyenia…thank you to all of you. You guys really did not have to help us in the individual ways that you did, but we are both so unbelievably grateful that you did. Thank you for helping us put our first little event like this together and making it as much a success as it was, and hopefully next year, or sometime soon we can put together an even bigger and better event.

8 thoughts on “Giving Back This Holiday Season”

“To live is the rarest thing in the world. Most people exist, that is all.” - Oscar Wilde 👩🏻‍🦱🖋
Last year she survived, this year she’ll live 💫🌅
Life‘s true gift lies in your freedom to design it beautifully ✨ With each sunrise, you get to chase the opportunity to fill your days with meaning - to live your life the way YOU choose 💭. Push yourself to pursue a life worth living! 🙏🏻⛅️🤍
New month. New goals. Same overall vision 🧿💫
Good karma my aesthetic. Keep my conscience clear, that’s why I’m so magnetic 🧿✨
Wherever life plants you, bloom with grace 🌺🌸🌼
Close Search (ESC)
Close Search (ESC)